We had a busy Sunday, this past weekend.  Up at 7am and out of the house by 8:30, we were off to Paarl where HPS, the photography club I belong to were having an outing to a steam museum.  This museum is normally closed on weekends but we had special dispensation to visit.  When I say museum you may get the wrong impression.  There are no exhibits as such, just an old loco repair shed with a number of steam engines in various states of repair and disrepair.  It looks as though there may be steam enthusiasts working there to repair some of these to their former glory.  It is the perfect place for photographers though, with lots of interesting textures and details to photograph. 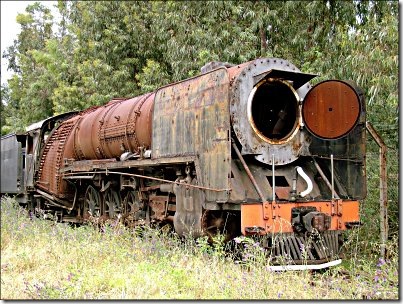 Amongst the rusted metal and long grass there was the beauty of nature too.  I snapped this flower and a nice spider web.

After some hours of moving around taking photographs we gathered in the shed and chatted while we drank coffee and ate biscuits.  Around lunchtime people started drifting off and we left, stopping for lunch at McDonalds in Paarl, before continuing on to Oude Molen Farm in Pinelands where we were meeting some friends that keep horses there.

We spent the afternoon there, standing around watching Jane train the horses.  Rory and some of the others had short rides.  Christopher didn’t want to ride as he was taking photographs.  He had been at the steam museum in the morning.  It seems that he likes photography and has quite a good eye for composition.  Perhaps I will pass my camera on to him when I buy my DSLR.  I was snapping away at the horses and people, getting a few nice candid shots.  Probably the cutest shot of the afternoon was of a week old foal.

It was nearly 5pm before we left there and after a fruitless search for somewhere to have tea we settled on heading back to the Helderberg, stopping off at the Engen One-Stop for food at the Wimpy.  It was after 7pm when we got home, and after watching Joan of Arcadia everyone pretty much collapsed into bed, except for myself, who sat trying to do useful stuff on the computer but kept dozing off.  I eventually gave up and went to bed.  Even though I slept for seven hours it was a struggle to get up this morning.  It was a fun day though.