The Silver Falcons, official display team of the South African Air Force perform at an air show at AFB Overberg.

Unlike the display teams of many other air forces the Silver Falcons pilots are not dedicated to the team only. Team pilots are all instructors at the Central Flying School based at AFB Langebaanweg and can only spend their spare time practising for their displays.

Each display starts and ends as a five ship formation, with the body of the display alternating between manoeuvres by this four ship formation and the solo display pilot. The team currently flies the Pilatus PC-7 Astra.

It was only when I saw this photo I took of Zoltan Veres spinning his Extra 300 in full size on my computer screen that I realised the small bright spots thrown off from the main smoke cloud are little smoke rings.  I’ve never seen anything like that before.  Here are two crops from the full-sized image that show the rings more clearly. 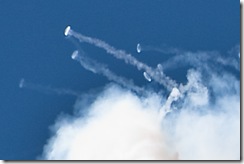 Zoltan Veres is an amazingly talented pilot; take a look at these videos I found while looking up info on him.